“I think Balanchine and Robbins talk to God and when I call, he’s out to lunch.”
Bob Fosse

That is one long title; Mama Mia! Here We Go Again.

One does not get an Oscar for choreography. The last time the Academy honored the dance world was in 1938. It was then called Dance Direction and the snooty-frooty film directors were offended that anyone could take the shine off of their magnificent luster.

So, it is incredible to me, that choreographers get dumped down to the bottom of the credit list under Other Crew. Some movies are defined by their choreography!

Here is poor Gene Kelly in the credits for Singing in the Rain, clumped in between the stand-ins and the secretaries. 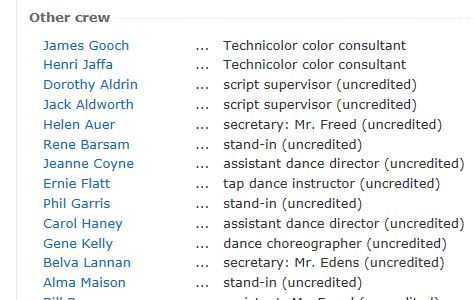 Even if you were the Director of a movie, your choreographic work is buried. Here is the listing for Rob Marshall in Chicago.

And finally Mama Mia! Here We Go Again; the Associate choreographer oddly gets a capital A in her title but is clumped with the boat drivers and accent coaches.

If you were to close your eyes and think of Mama Mia! you would probably have an image of Meryl Streep in those blue overalls and … dancing, dag nab it! The movies are all about dancing and singing.

The style of the movie is camp or high camp. The exaggerated poses of the Dynamos reminds us of the delicious Priscilla, Queen of the Desert. And for good reason, this is set in 1978 and disco.

The first is in Waterloo. This is a very up-beat song and takes place in a restaurant. As the lead begins to sing, the people in the restaurant join in; waiters, waitresses, cooks, diners.

One of the dancers is in a wheelchair. It is not common but it isn’t unusual either to see a wheelchair dancer. We see her zip through the number a couple of times and then we see her lean in to join everyone singing “whoa whoa whoa whoa Waterloo”.

There is a fantastic and unique moment when the camera’s angle is from the top, looking straight down like a Busby Berkeley film. The dancers are going to make a flower pattern that moves. Dead center is the wheelchair dancer, spinning in place and I mean whipping around faster than any two-footed dancer could ever do.

I’ve never seen anything like that and I’d almost buy another ticket to go see the movie again; just for that terrific dance moment. Really good, really clever. Fantastic!

The second dance moment was with Cher and Andy Garcia. They did something that I’d never seen before; they paused and held the shape of the dance movement. It is hard to describe because they were dancing, yes, but they had these elegant dignified moments where they stopped. It was powerful.

Remember that all of the other dances in the entire movie are frenetic and frenzied and over-the-top (camp again) celebrations. This dance is in total contrast to everything that we have seen so far in the movie. It is special and cements our image of Cher and Andy Garcia in the movie. Brilliant.

I’d almost buy a ticket to go see the movie again; just to be sure that I saw what I thought I saw!

Those two moments have been chasing me since I saw the movie three days ago. If you get a chance to see this flick (or see it again!), pay just a little extra attention to the choreography. It would be more than what the Academy does.